A little awhile ago, we plugged in the final component to the solar power system here at the orphanage. There’s still some tweaks to be made over the coming week, but I can officially report that everything is actually working. We’ll be able to provide 24/7 power to the server, charge 25 laptops, and light 10 rooms during the evening hours. Before, the city was only giving 5 hours of power a day, on a good day. Now, the 65 kids here don’t have to wait for the grid to switch on. As long as there’s sun, they’ll have access whenever they want to computers and Internet. And there’s plenty of sun here.

I want to take this opportunity to thank three groups that made this possible: Oyster Point Rotary Club, the Rotary Club of City Center, and the Office of Community Engagement at William & Mary. We’ve installed a pretty ambitious set-up here, and we would never have been able to dream so big without their support. 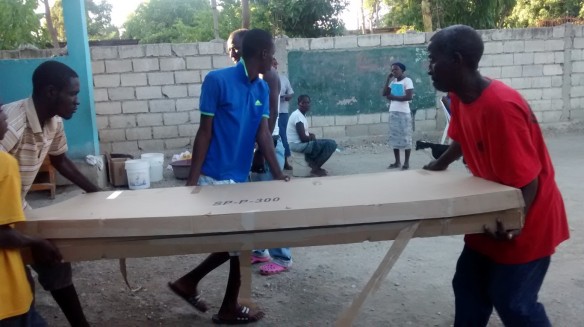 Unloading the panels off the truck. 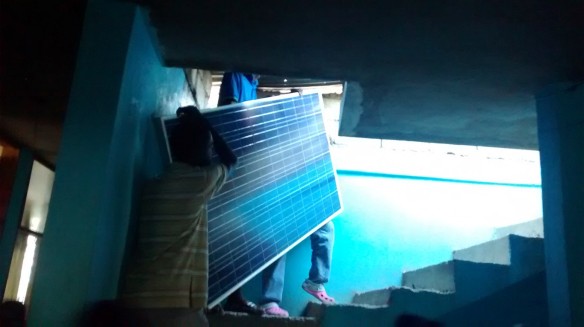 Heading up the stairs with one of the panels. 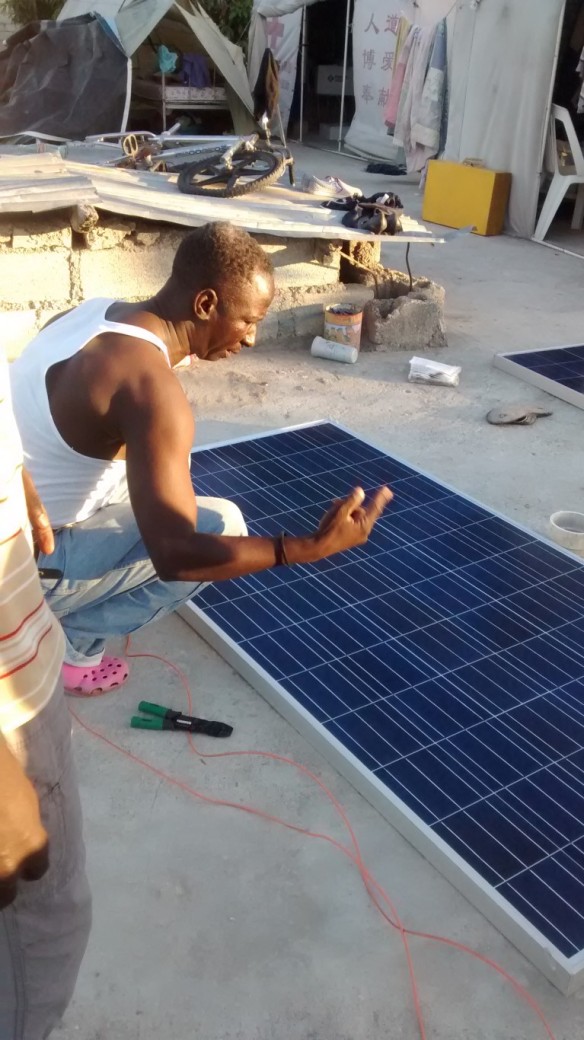 Silar talking about the right angle for the sun to hit things. 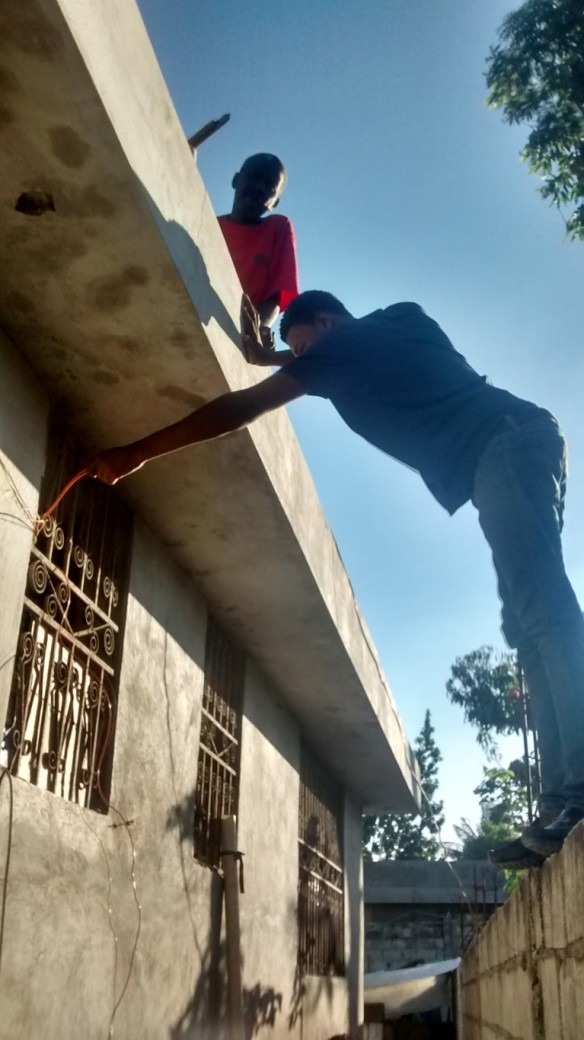 Passing wire through the window to the battery room. 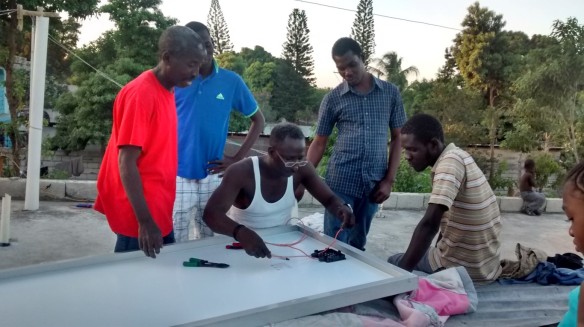 Hooking up the panels.

Of course, none of this would be possible without people also contributing their energy and expertise. Thanks to the Unleash Kids team – this is the fourth solar installation our members have worked on in Haiti, and they’re getting bigger and better every time. Also, shout out to Ben and Shuyan, who stepped in at the last moment to build some charging set-ups for the school they support and then generously let us borrow one to use at the orphanage instead. Finally, Silar himself, the pastor in charge of the orphanage here, used to be an electrician. In the end, when I say “we”, I actually mean “Silar did it while I watched and Adam and George advised on the phone.” Of course, I’m learning a lot through this whole process too, and gradually getting to the point where I can do a little more.

When I went to the hardware store here in Haiti to buy the last pieces, there were some other foreigners also looking at panels. They turned out to be a solar installation group from a university. They asked what I came here for, and the list was a little longer: “Well, we do solar, but we also work with servers and Internet. Plus laptops. And, you know, education.” Sometimes, all those pieces really do feel overwhelming. Often, at least one of them is getting to be extremely frustrating, at any given moment. But, at the end of the day, I’m glad our group is looking at the whole picture. Our volunteers don’t just address half of the problem. We look at it all, and we keep coming back, making improvements, and moving forward.

“Hey Jeanide, we should have a party for the kids at Silars’ the day the group gets here.”

I know what you’re thinking – Sora, parties take a little bit more planning than that. Yeah, but that’s all I had to do personally to ensure that everyone got a real treat this Friday. Jeanide, our teacher who works with the kids there every week, took care of everything:

-putting together a program of kids performing dances, sketches, and jokes
-asking the strongest boys to get out some speakers
-buying the drinks and snacks
-getting the kids to write thank you notes to all the visitors
-even coming up with riddles and rewarding correct responses with pieces of candy…

Silar said himself he never imagined our “ti fet” would be this big! It was a true Haitian experience to welcome the three students from Monterey to the country, complete “Krik!” “Krak!” traditional riddle games, costumes, and of course “blag” (jokes, but they’re only funny if you’re Haitian).

Me as a Kreyol translator, trying to interpret jokes:

“So…this one is something about a woman trying to get pregnant having to follow all these weird instructions. Again, you have to be Haitian to get it.”

Of course, the dance party before and after the official event was something everyone understood… 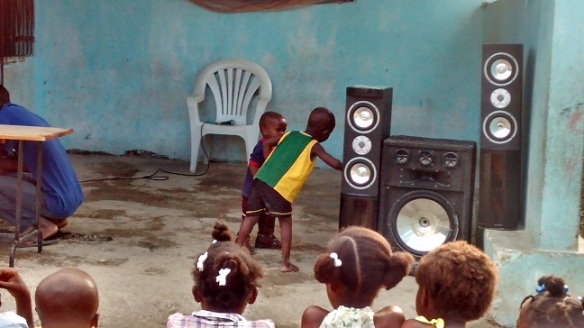 Turn on the speakers – let’s pump it up!

Believe it or not, underneath all this fun we still managed to have some semi-serious conversations about everything the kids did with the laptops last year. The riddles Jeanide asked related to things they learned over the course (“What does FIFA stand for?” coming from the sports unit), the hilarious satiric parody of cholera information films included a section on looking up the disease on Wikipedia, and some of the stars from the class came up and talked about their favorite activities (writing and drawing, predictably, are the most frequently used and liked).

Silar took the opportunity to get the kids excited about the next thing coming: 20 more kids participating in the XO course. Which, of course, means more work for Jeanide…

But she did such a good job pulling this party off, I’m sure she can handle it!

Well, there’s my first week done in Haiti, and since it coincided with Christmas here’s a list of 12 gifts I received. It’s been great to be back and to be welcomed by so many people – they’ve all helped to make my “first Christmas away from home” very special.

-hospitality from Silar and his wife 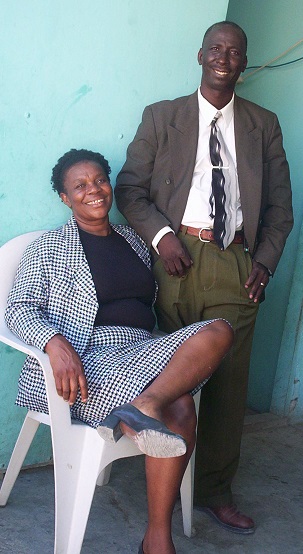 When Adam first asked Silar if I could spend my first few nights in Haiti at his orphanage, he said, “She can stay her whole life if she wants to.” I wish I could – not only did they take really good care of me, but they’re taking good care of all seventy kids that stay there in spite of some very limited resources. It’s really a very special place, home to one of the best XO laptop programs I know.

-inspiration from the kids at Silars’ 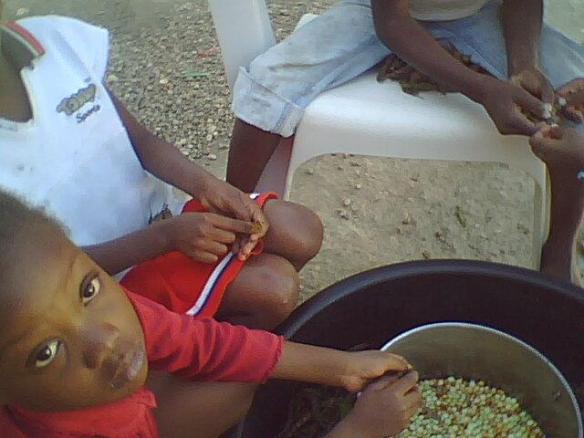 For example, all the kids are up by five or six for devotion, and then after breakfast they start chores. That means by the time I finally woke up, everyone was already hard at work washing clothes and dishes, sweeping rooms, preparing lunch…When I say everyone, I mean everyone. Even tiny hands can get to work sorting out beans.

-a visit from my old friend Jimmy

The first time I ever left America on my own (as opposed to with a group of volunteers), I interned with the English program at Jimmy’s school. I went in very naïve and I’d like to think I came out a little less after my time there, and the experience was also my inspiration to start exploring computers. It was nice to return the favor almost two years later by bringing Jimmy by Silars’ to show him what a fellow Haitian has been able to do through sheer faith and heart.

-enthusiasm from Hope for Haiti’s Children

Junior, Jeanide, and I visited this orphanage and school to meet with all the key people about the XO program that we’ll be starting there later next month. They’re committed to finding the ideal set-up, time, and people to make everything happen, which is great. I took photos of all their electrical equipment to pass on to their tech guys, plus this one of Junior posing by their bus.

-peace of mind from Robenson

Jameson, one of Project Rive’s teachers, came up Saturday with his brother Robenson (“came up” makes it sound casual: we’re talking about hours and hours on the back of a truck going down dusty, bumpy mountain roads in the hot sun. These guys are dedicated) to get supplies for the solar charging system Robenson will be installing for Project Rive. We got our big battery and solar panel at MSC-Plus and went over the details of setting everything up. Robenson’s handyman dad taught him everything, and then he went on to study plumbing and electricity to learn even more, so I’m pretty happy we were able to find the right man for the job.

-reliability from the XO laptops

We tried out 17 that had been sitting in Junior’s house untouched for over a year and they all turned on and booted up – which means they’ll be making their way soon to schools and students who can use them.

-a girls’ day out from Jeanide

I spent the night with Jeanide, who teaches at Silars’, and asked her to take me shopping for clothes the next morning since I’ve never had the chance to do it in Haiti before. “Are you okay with second-hand things?” she asked. I assured her I was, so Jeanide led me through the throng that is Mache Taba – a street market that was a crowded maze of sellers and buyers looking for bargains on clothes, food, toys for Christmas, and everything in between. I didn’t end up buying anything, but I got a great experience, and Jeanide got some Christmas presents for her family and herself.

After the market, we went home, and after flipping through the channels for a while we found a Mr. Bean movie playing on TV. The language barrier wasn’t an issue at all with getting the jokes, and the film’s plot, in which Mr. Bean’s travel plans constantly go awry, reminded me of some of my own crazier adventures getting around in Haiti. The fact that a video camera was a central part of the plot also rminded me that I need to take more pictures – sorry guys!

-a fun night out from Junior

Junior wanted to show me “the real Haiti” so we went out one night in Petionville, a clean, safe, (rich) part of town where it’s okay for a blan to be out at night. We ended up going to one of the parks and watching a Christmas show that featured acrobats, singers, rappers, and a fashion show. The place was packed, but we found a good view standing on a park wall, and I really liked getting the chance to see this piece of Haitian culture – whereas Junior, since he’s an actual Haitian, found a lot of it boring but stuck around because he knew I was having fun.

This couple recently sold their house to move to Haiti permanently, so this was their first of many Christmases in the country. They invited me to join them for a screening of the 1976 musical version of Scrooge, which they assure me is the best version out there (and they’ve watched them all – it’s a tradition). The songs were stuck in my head for the rest of the day.

-Christmas dinner from the Mission of Hope family

Even on her day off Renee doesn’t really rest – she was up cooking in the kitchen at seven on Christmas morning. Among many other delicious dishes that emerged, we had a “lobster dinner.” The Haitians found it funny that it’s considered an expensive meal in America. Well, it was cheap this time, and as an added bonus I got to eat it with Renee, Lex, their children, and many missionary friends, making it feel like a real Christmas even if there was a distinct lack of snow. 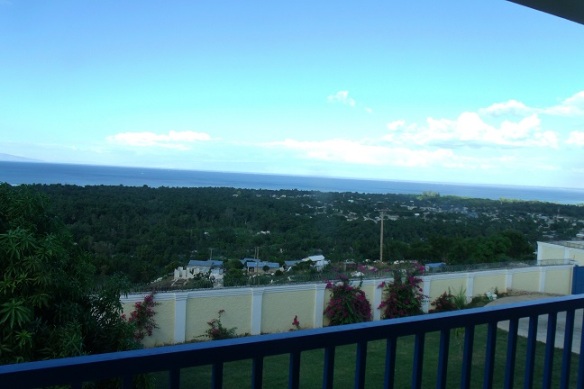 I walked all the way up the hill today (they offered to drive me but I wanted a workout) to visit Be Like Brit, an orphanage with a very unique story – after their daughter Britney Gengel died in the earthquake, her parents decided to honor her memory by building the orphanage she wanted to start here one day. As the director Jon explained to me, the goal is to help the “poorest of the poor,” taking kids from very vulnerable situations into an environment where they can grow up to be Haiti’s next leaders. So much has been done to provide for the kids here – including, hopefully, a Sugar course sometime in the near future.

And, just to make this a baker’s dozen, thanks to all of you whose contributions, support, and encouragement helped to make this possible.